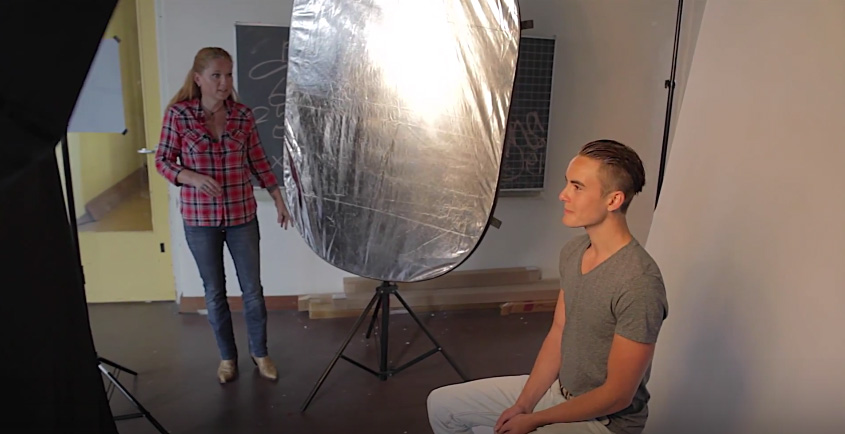 Filmproject ‘The Listening Eye’ by Nikki Nooteboom is ready to go! More info on its website where you can see three short films:

* A five minutes compilation
* A trailer made by Roger Busschots, Infofilm
* The Making of by Cinemaffia en Infofilm, gives you a glimps behind the scenes.

Film project
How does someone experience watching art? That’s the basis of Nikki Nooteboom’s idea of making this movie ‘The listening eye’. Registering intense emotions of 150 different people resulted in a fascinating eye locking film. This film is an installation without a beginning or end and (not like the trailer) without sound. It’s like a cinematic wallpaper.

Nikki filmed 150 different people for ‘The listening eye’, 25 seconds each. This resulted in a film of almost an hour, where you see faces from all cultures, of all ages and religions. Every face tells it’s own personal story, so it can be watched individually. The combination of all different faces makes this film into a cosmopolitan creation.

Every person chooses an art work and looks at it very closely, aware of the emotion it brings. It can be a well known piece of art, but it can also be totally unknown but important to that person. In the studio he or she watches the art work from memory, projecting it on a black piece of cloth where the camera lens is put through. The person who is being filmed is alone, doesn’t see Nikki while filming.

Al clips of the 150 faces have been edited into one film, the transitions are soft, no sound. Nikki filmed with her DSLR camera in her studio with the same composition and lightning.

Nikki is a photographer, film maker and teacher. From her studio in The Hague (Holland), she works for various clients. People and their emotions are always her subject. Her strength, besides the visualisation, is her knowledge of marketing and communication. Before she started photography, Nikki built a company that became European within three years.

Her personal work is always triggered by a spontaneous experience, the execution is due to that idea. That can be photography, graphic design, text or film. ‘The Listening Eye’ is her first big filmproject; a series of portraits filmed, with an extra dimension.

This film is meant to be shown as an installation in public spaces, like museums or galleries. For example in the main hall, the coffee corner or the outside of the building. Because every face tells it’s own story, you can start watching at any time for as long as you want.